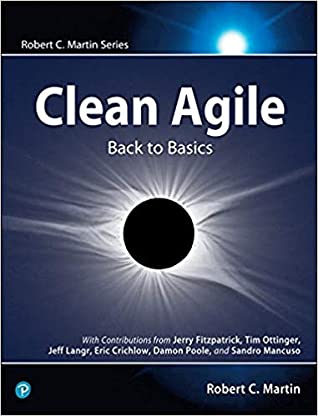 Rediscover Agile from its inception.

I was really excited about the publication of Clean Agile but the book left me somewhat disappointed. It’s an interesting book, but it could have been far more impactful.

On a positive note, the author is widely recognized in the software landscape, having contributed to the Agile movement right from the start, and having interacted with its most famous actors. Bob Martin is very well placed to take us back to the roots of agility, at the time when this word still made sense.

“Agile is a small idea about the small problem of small programming teams doing small things” says the author. But Agile has grown up where it probably shouldn’t have. Lean, Kanban, LeSS, SAFe were added to the mixture, and the result is far from being a magical potion. But as surprising as it may seem, the current Agile is hard to challenge. Agile has stopped being agile. Experimenting with current practices is seen as not being agile. We need clarifications and I found in this book a good aid in this direction.

Bob Martin does a wonderful job to relate the history and context behind the nascent of the Agile Manifesto. We review some key parts that have clearly been ignored by most of us. We relearn the basics to see the forest for the trees again. But may the book change the obscure vision and the wrong beliefs commonly encountered in the workplace? I don’t know. I doubt it. The people that would read the book will probably be the ones who are the most familiar with the subject. Maybe I’m wrong. I hope so.

On the negative side, I found the book lost its soul as it progressed. The author included a few external contributions which strongly depart from the author’s engaging style. The Agile coaching contribution is too verbose and the craftsmanship chapter by Sandro Mancuso, while pretty good, feels like a new start in the book, and not the continuity.

In addition, the book misses guidances on how to transition from where we are now, to finally go where we could have been, how to manage conversations to challenge the actual practices, and how enterprises can get out of the hole that cost them so much to dig. You will not find answers to these questions in this book.

In the end, the book is still a valuable contribution. Agile has shifted where many developers, including me, don’t feel at ease. Agile slowly became a useless word, as we can no longer expect anything from it. This book is one small step for the reader, but certainly not one giant leap for agility.