There is not […​] a more uncommon thing in the world than common sense.

— Nicholas Amhurst
political writer, The Secret History of the University of Oxford, 1726

Starting a day without a good breakfast is unthinkable. Every morning, I eat a square of dark chocolate whose packaging mentions “a pleasure that makes sense.” Great! I am glad to hear that succumbing to my sugar addiction makes sense after all.

This slogan has become ubiquitous not just among organic food. The company for which I work uses the slogan “The Cloud that Makes Sense.” And younger employees — the so-called millennials — are the first generation to value a strong sense of purpose over anything else.[1]

Common sense must make sense. Who wants something that does not make sense? When was the last time you were told not to use common sense? The truth is you should probably stop using it.

Introduce the following ingredients in a bowl and stir delicately during several years: 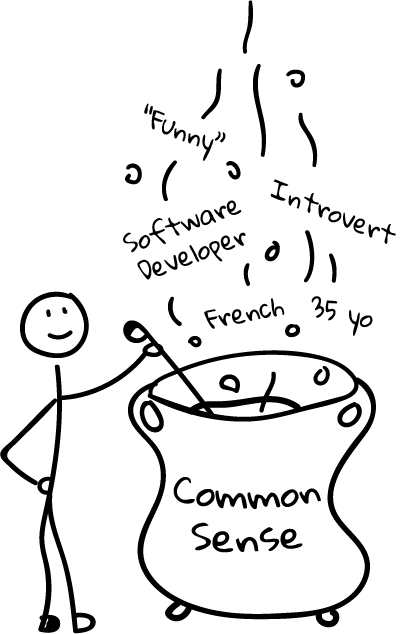 The quality of the ingredients is essential to the success of any recipe. As outlined by the previous examples, we are all following the same recipe but using ingredients from very diverse origins. It’s not surprising that we all get a different result. 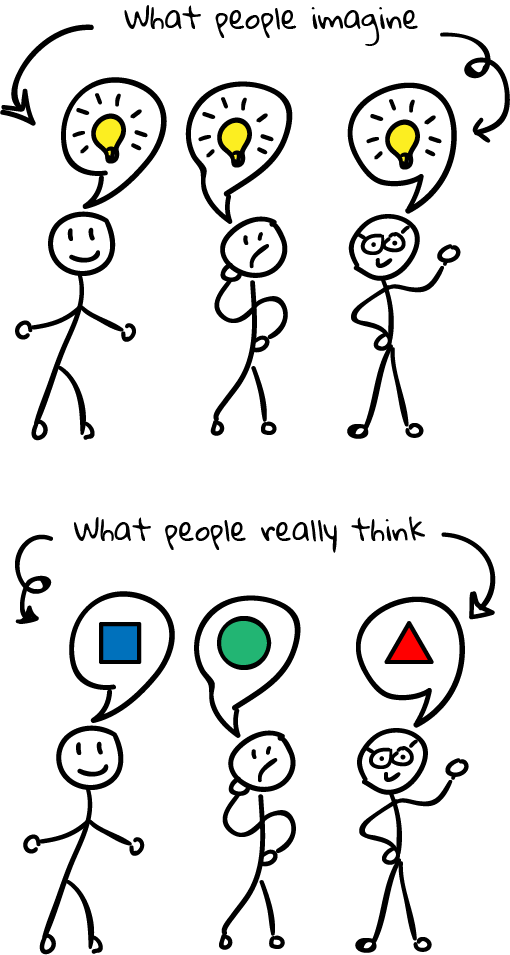 We must therefore learn to consider common sense as our uncommon sense. Cannibalism still makes sense in some cultures or in different times and places. It’s not a problem as long as you plan your next vacation wisely.

To illustrate the limits of common sense, we must go back in time to the beginning of the Scientific Revolution. In 1514, Nicholas Copernicus discovered that the Earth orbits around the sun. Claiming that the Earth was not at the center of the Universe if you are a Polish priest was asking for trouble, and thus Copernicus published his landmark discovery anonymously…​ We will have to wait almost a century for two astronomers, Johannes Kepler and Galileo Galilei, to validate his theory. Common sense is stubborn.

The truth is common sense excels at filling the blanks to pretend things have sense. In Everything Is Obvious, sociology researcher Duncan J. Watts mentions: "Common sense is wonderful at making sense of the world, but not necessarily at understanding it."[2] As we have seen in the previous section, common sense is uncommon, or personal. Common sense is therefore subject to our numerous cognitive biases. For example, the attentional bias makes us pay more attention to certain stimuli and ignore the vast majority of available information. And by ignoring details, we often miss what is really making sense.

But common sense is not just wrong, it is sometimes contradictory. We say that birds of a feather flock together but also that opposites attract. "When opposite ideas appear equally obvious, something must be wrong with the entire concept of obviousness," adds Duncan J. Watts in the same book. Similarly, we can quote the Complementary Law: "Any two points of view are complementary." Even global warming can make sense for a country like Russian to turn Siberia into the breadbasket of the world and the Arctic sea the crossroad of the world as higher temperature means more favorable conditions for agriculture and new maritime navigation lines at the North pole.[3]

What is obvious is that common sense is of little help in decision making. And when common sense fails us, we often ask for more common sense as if we didn’t rely on it initially and as if it could make a difference…​ We need a better approach.

We have already elaborated that we cannot trust our common sense. We don’t think the way we think we think.[4] We are not rational creatures, even if we think we are. The seminal book Thinking, Fast and Slow condenses in more than 400 pages the most surprising experiments about our irrationality. We can’t use common sense to make rational decisions.

The solution is instead to rely more on science [5], and adopt a more systematic approach, especially at work. We need what professor Jim Taylor called "reasoned sense," that is, sound judgment based on rigorous study of an issue.[6]

In the end, common sense makes sense until you have thought critically about it, in which case, common sense stops making sense. Learning is the antidote. Here is a better definition of common sense that I have found online:

Common sense is the ability to almost instantly eliminate false information because of a lifetime of learning how the world works.

I want to conclude this article with my chocolate bar that makes sense. What the company says, in the end, is that they tried to do what is best for every actor in the process. Doing his best to create a positive impact in our world is, for sure, a great example of something that makes sense. Saying it is great. Doing it is better. Just make sure not to use your common sense to make sense 😉.

1. https://www.forbes.com/sites/afdhelaziz/2020/03/07/the-power-of-purpose-the-business-case-for-purpose-all-the-data-you-were-looking-for-pt-2/
2. Everything Is Obvious*, Duncan J. Watts, https://www.amazon.com/Everything-Obvious-Common-Nonsense-2011-07-01/dp/B01K92XR2G/
3. Sapiens, Yuval Noah Harari, https://www.goodreads.com/quotes/9669896-global-warming-in-contrast-will-probably-have-different-impacts-on
4. I found this sentence in the same excellent book Everything Is Obvious. I really recommend this book to challenge your common sense about common sense.
5. Peter Ellerton, We can’t trust common sense but we can trust science, https://theconversation.com/we-cant-trust-common-sense-but-we-can-trust-science-53042
6. Jim Taylor Ph.D., Common Sense Is Neither Common nor Sense, https://www.psychologytoday.com/us/blog/the-power-prime/201107/common-sense-is-neither-common-nor-sense
7. There is even a whole book dedicated to this principle.: 80/20 Running, Matt Fitzgerald, https://www.amazon.com/80-20-Running-Stronger-Training/dp/0451470885/
8. I have read a lot about the running posture. Opinions vary slightly but your posture must not be a priority to run faster, except of course if you are running using a very dangerous and unnatural style.
9. No other book had such an impact in the running world as Born To Run written by Christopher McDougall, https://www.amazon.com/Born-Run-Hidden-Superathletes-Greatest/dp/0307279189/
10. I learned about the possible danger of stretching in several books but the best explanations I have found are present in a French book that a friend of mine recommends to me: Bien-être et Jogging. Serge Cottereau, https://www.amazon.fr/Bien-%C3%AAtre-Jogging-Serge-Cottereau/dp/2912690633
11. I found this definition of common sense in a very long thread on Quora. https://qr.ae/pN0ny4